This Saturday, 22nd August, Scottish Trans, Equality Network, and lots of our lovely volunteers lead the Pride march through Glasgow to call for trans rights now. The day started pretty early for us as we arrived in Glasgow at 9 to set up our stalls on the Green, and decorated the float with an assortment of rainbow balloons, placards, banners, and a bunch of bubble guns to fire on the way round! 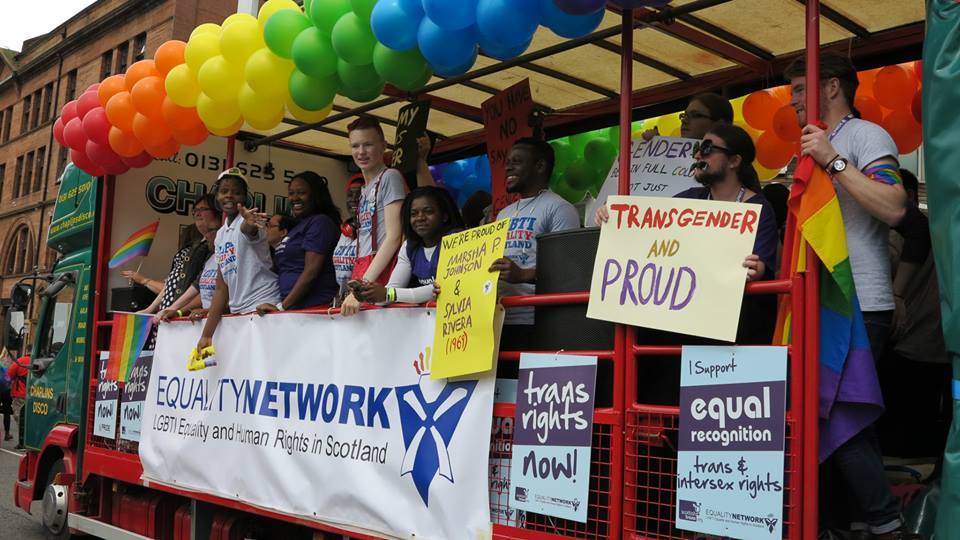 After hearing some speeches from our float at the start point of the march (there was a focus on the legal rights that are still unavailable for some in the trans community, the need to make our LGBTI activism global and inclusive, and the specific problems around trans healthcare) we took to the streets to spread our message of trans rights now! The parade was so much fun – we danced our way around central Glasgow and had loads of people watching and waving. It was an amazing opportunity to get to call for trans equality at an event not only attended by many from the LGBTI community, but also watched by hundreds more, who may not be aware of or think about the discrimination that continues to be faced by almost all LGBTI people. We got to be ourselves, have fun, spread our message, and be proud!

After the march, we did the speediest clearing of the float we could, and headed in to the stalls. From 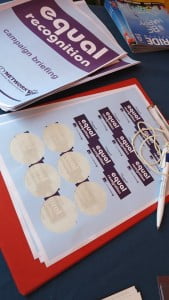 there we had a hectic day where we were visited by tonnes of people, some of whom had never heard of us and some more familiar faces! We managed to run out of Equal Recognition postcards as so many people signed up on the day to our call for equality for all trans people. The people signing up were all different ages, cis and trans, knew nothing about it or knew everything about it… it was a really great feeling to know that our call for equality was being heard and that so many people want to support us with it.

So we spent the afternoon chatting with people and letting them know what we do and what we’re working on at the minute and it was loads of fun – everyone was really friendly and it was a great chance to let people know who we are and what we stand for. We gave out lots of info, sold a bunch of trans pride badges, and heard stories from people about how being trans affects their lives. Some people were talking about all of the positive changes in the last few years and how they feel more able to be themselves, whether that’s at work, at home, or popping to the shops. Some people though were telling us about the problems they continue to face due to being trans – discrimination, stereotyping, and a lack of respect. Which is why we all need to keep working hard to make our voices heard and make sure that trans people have the same rights as everyone else, and hopefully we’ll hear less and less of these stories with each new Pride.

At 6 o’clock it was time to pack up and head home, so after carrying many many boxes back to the van (thank you so much to our volunteers for helping!) that was us done! Thank you so much to everyone who was there, who volunteered with us, or who came and said hello – the day wouldn’t have been the same without you.