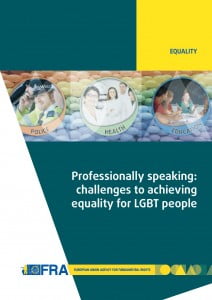 Speaking: Challenges to achieving equality for LGBT people in Europe”

The report spoke to staff from a number of professions who are responsible for working directly with LGBT people in areas where we might expect to see particularly good practice in improving LGBT equality – such as doctors, nurses, teachers and law enforcement officials, from a range of EU member states.

The section of the report that talks the most about trans rights is the section on healthcare. The report highlights Scotland’s Gender Reassignment Protocol as an example of best practice for trans healthcare policy.

However, it highlights the ongoing problems for trans people when it comes to accessing healthcare – particularly in comparison to cisgender lesbian and gay people, and also in relation to a lack of understanding about the diversity of trans identities (especially non-binary identities):

“Overall, the findings indicate that trans people are more discriminated against than lesbian and gay people in the majority of EU Member States. There is less social awareness of trans identities than of lesbian and gay identities”

“However, it appears that across the EU Member States the majority of professionals do not take into account the ways that some trans people identify as other than male or female.”

There is also a trans healthcare nurse quoted from the UK talking about the issues faced by some trans people due to a lack of knowledge amongst GPs around trans identities:

“The most common one is when the local GP [general practitioner] has refused to prescribe. That is common. When someone has come as far as the Gender Clinic, has seen us and we have said this is fine, transition is going well, they are stable. Let’s get them onto some oestrogen and antiandrogen and the GP writes back saying they won’t do it.” (Trans-healthcare nurse, United Kingdom)”

This report clearly shows that whilst the situation for trans people in healthcare in Scotland is definitely better than in many EU member states, we must keep working to ensure that there is fair and equal access to healthcare, both trans-specific and general, for our communities.