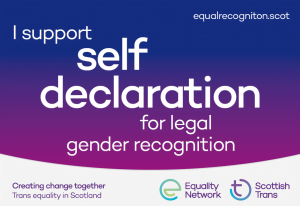 Scottish Trans welcomes the UK Government’s announcement of a consultation on reform of the Gender Recognition Act 2004 in England and Wales. The UK Government’s promise to consult on reform follows over two years of focused campaigning from transgender equality groups together with pressure from the House of Commons Women and Equalities Committee.

The UK Government’s decision to consult in the autumn on allowing trans people to change the gender on their birth certificates by self-declaration, without having to provide intrusive psychiatric reports and other onerous evidence, is positive step forward for society. It will uphold transgender people’s privacy and dignity and also ensure that their pensions, insurance policies, civil partnerships and marriages are all administered correctly and smoothly. Currently, birth certificates are much harder to change than all other types of identity documents and records so transgender people are often left in limbo with the gender on their birth certificate contradicting all their other official paperwork.

For over 20 years, transgender people in the UK have already been able to change the gender on their passports, driving licences, medical records and employment records by self-declaration at the start of their transitions. It makes no sense to continue to treat birth certificates differently from these other forms of identification and the proposed reform to remove this unfair anomaly is long overdue.

Making it easier to change the gender on birth certificates will not affect how transgender people access single-sex services because they can already use the self-declared gender recorded on their passports and driving licences as identification. Many trans women early in their transitions already regularly use women’s services and facilities without any problems.

Reform of the Gender Recognition Act will not affect the process for accessing NHS gender reassignment services. Medical assessments and criteria for approval to receive NHS hormones and surgeries will remain unchanged.

Sports governing bodies are legally permitted to restrict participation of trans people, even once they have received legal gender recognition, if this is necessary to ensure fair and safe competition. So self-declaration does not create any additional challenges for competitive sports.

There is no evidence to suggest people will falsely change their gender on their official documents. This has not been a problem within any of the existing gender self-declaration processes in the UK or Ireland. It is a serious criminal offence, punishable by imprisonment, to make a false statement on a legal statutory declaration so this provides sufficient protection.

2. Argentina, Australia, Austria, Bangladesh, Denmark, Germany, India, Ireland, Malta, Nepal, New Zealand, Norway, Switzerland, and also the states of Oregon and California in America all have more inclusive gender recognition procedures than the UK. International best practice is to allow gender recognition through self-declaration, to provide a gender neutral option for non-binary trans people who do not identify solely as men or women, and to allow access to gender recognition for young trans people who have transitioned with their parents’ consent.

3. The House of Commons Women and Equalities Committee’s Inquiry into Transgender Equality published its report in January 2016 recommending reform of the Gender Recognition Act 2004. Scottish Trans was one of the groups that submitted written and oral evidence to the Inquiry.