Leading LGBTI (lesbian, gay, bisexual, trans and intersex) and women’s equality organisations in Scotland have today welcomed the launch of the Scottish Government’s consultation on improving the Gender Recognition Act 2004.

The Scottish Government consultation paper launched today proposes to simplify how transgender people can change the gender on their birth certificates. It is proposed to bring the process for birth certificates in line with that for other identity documents such as passports. Trans people would need to complete a formal legal statutory declaration confirming the gender identity in which they live and their intention to do so permanently for the rest of their life. Passports, driving licences, medical records and employment records are already changed by self-declaration when a person starts living in their gender identity.

“We welcome the Scottish Government’s proposals to reform the Gender Recognition Act.  The current process to change the gender on a trans person’s birth certificate is a humiliating, offensive and expensive red-tape nightmare which requires them to submit intrusive psychiatric evidence to a faceless tribunal panel years after they transitioned. It makes sense for birth certificates to be brought into line with the self-declaration process already used to change all other identity documents when trans people start living in their gender identity.

Being able to change the gender on their birth certificate to match their other identity documents is important primarily to uphold trans people’s privacy and dignity but also to ensure that their pensions, insurance policies, civil partnerships and marriages are all administered correctly.

We urge the Scottish Government to also provide legal gender recognition for non-binary trans people so that all trans people can have equal inclusion and acceptance within Scottish society.”

“For over a decade, we have engaged in constructive dialogue with our colleagues in Scottish Trans, Equality Network, LGBT Youth Scotland and Stonewall Scotland. We do not regard trans equality and women’s equality to be in competition or contradiction with each other. We support the Equal Recognition campaign and welcome the reform of the Gender Recognition Act. Rape Crisis and Women’s Aid in Scotland provide trans inclusive services on the basis of self identification. We will continue to work collaboratively with Scottish Trans and other equality organisations with the aim of ensuring that new processes are appropriately designed and without unintended consequences.”

“This reform is desperately needed as it’s time to move the legislation on from being a long complicated bureaucratic process, which treats being trans as a mental illness.  We believe a better Gender Recognition Act is a crucial next step in achieving equality for all trans people and will help reduce the discrimination and abuse that is all too prevalent in our society.”

The Scottish Government also propose to align the age a person can apply to change the gender on their birth certificate with the age of legal capacity in Scotland, which is 16. In Scotland, people can get married, leave school, have a child, vote and join the armed forces at the age of 16. The Children and Young People’s Commissioner Scotland supports the age reduction.

“LGBT Youth Scotland welcomes the Scottish Government proposals to reform gender recognition law in Scotland. We are working with young people through our youth commission on gender recognition, to bring their views and experiences to the forefront of the consultation. These reforms will allow all trans people, including trans young people, to live with dignity and equality.”

The Scottish Government consultation paper positively acknowledges the importance of respecting the lives of non-binary people who do not identify solely as men or women. It outlines a variety of possible actions that could assist non-binary people, from making small changes to administrative forms through to providing recognition of non-binary people in legislation and service provision.

At the Scottish LGBTI Hustings event during the 2016 Holyrood election campaign, Nicola Sturgeon was asked when she would recognise non-binary gender identities in law, and replied:

“I think we should, and I think we should do it in the next Parliament, and that’s one of the specific things I think we should look to take forward in terms of reviewing the gender recognition law. I think it is no longer, in this day and age, appropriate for people not to have their perfectly legitimate identity recognised legally.”

“Reforming gender recognition law to include non-binary people would be a clear indication that our identities are seen as equally valid to those of men and women. This is a vital step towards creating a society in which non-binary people are truly recognised, and treated with dignity and respect in all aspects of our day-to-day lives.” 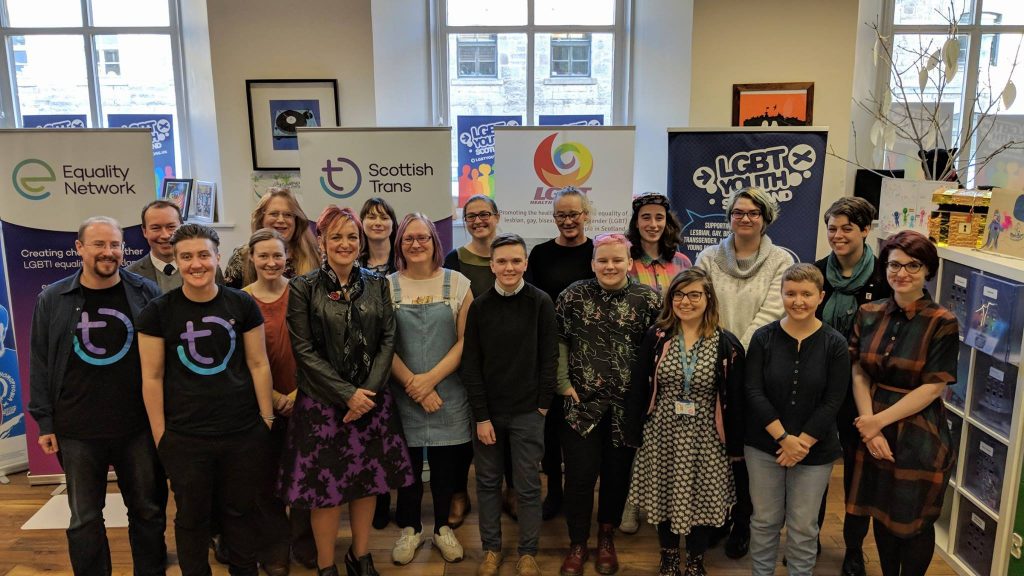 Launch of the Scottish Government’s consultation on reform of the Gender Recognition Act. 9/11/2017

For further information, please contact James Morton, Scottish Trans Manager, on 07554 992626 or james@equality-network.org Quotes and photos from, and interviews with, transgender individuals can be provided.

LGBT Youth Scotland has set up a Youth Commission on Gender Recognition to bring young people’s views and experiences to the forefront of the consultation. Members of the group may be available to speak to the press. Contact: communications@lgbtyouth.org.uk