This International Women’s Day, three members of the Equality Network and Scottish Trans team reflect on what they #ChooseToChallenge in the fight for gender equality 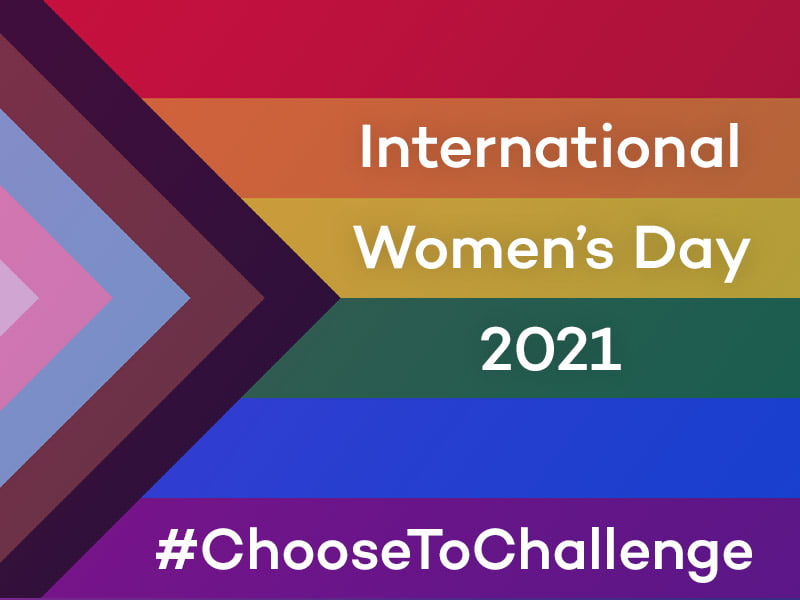 This IWD the theme is Choose to Challenge. In a world of Covid, division, and overwhelming challenges that threaten to tear so much apart, I would like to go small and personal.

Sometimes the challenge chooses you: My mother grew up during the authoritarian Apartheid years in South Africa, where women were taught to silently mind their place. She, a white girl, chose to challenge the injustices she saw to the extent that her father called in local politicians and pastors to talk sense into her. One councillor left, defeated, saying he wished she’d change her views (unchanged!) because the Party desperately needed someone like her.

Sometimes the challenge chooses you: Separated from my father, she was a single mother when both those things were frowned upon. My weekend father taught me about happy-go-lucky freedom from responsibilities and routines. Mom taught me the real lessons: About putting food on the table and shoes on my feet when her purse was empty. About attending my school events no matter what. About choosing to challenge a world that told her she couldn’t and shouldn’t and daren’t and yet she did. She shared her joys and sorrows, and taught me to challenge my own world with her grace and steel.

I may not have learned all the lessons instantly or linearly. But I learned.

Sometimes the challenge chooses you: She is 80 now, recovering from Covid. We travelled half-way across the world to care for her: her body is frail but her mind and humour remain sharp, her spirit as indomitable as when she chose to challenge the things that told her no.

She showed me how to challenge an intractable world and make it and myself better, one deed, teardrop and smile at a time. I am proud to call her my mom, and I hope to live up to her legacy.

I was not asked to write this blog for International Women’s Day, but I was able to volunteer. This is important to me because as an apparently female non-binary person it’s often either assumed I should automatically be included in “women’s stuff”, or assumed I should be banned. However, nothing about gender is that cut and dried – at least not for all of us.

I am non-binary and agender, and because I don’t have a gender, the whole concept can feel like something imposed from the outside, that literally makes no sense. But this can be true for women as well as for non-binary people. The rules that societies impose about what it means to be female are often weird, alienating and downright oppressive. No-one, whatever their gender, should have to dress or make themselves up in a particular way, be limited in what jobs they can do, or how safe they are.

The words “girls” and “ladies” feel alien to me, and “girly clothes” feel about as natural on me as they would on my cat – but I do relate, in a complicated way – to the word woman. Issues that disproportionately affect women affect me, sexist insults hurt me, and, on a practical level, women’s rights are my rights.

There’s a phrase that did the rounds on Twitter a while ago – “I caucus with the women.” It means that if there is a women’s group discussing women’s rights I want to be included. Not all non-binary people feel that way, of course, but where women’s rights are being discussed, I still feel my experience is relevant and I want my voice to be heard.

So, as a non-binary person, I caucus with the women today, and I choose to challenge misogyny, gender stereotypes, and especially the gender binary.

(By the way there is an International Non-Binary People’s Day. It’s on 14 July, and I’ll be celebrating that too.)

My feminism is intersectional. In order to tackle inequality and misogyny, it has to be. If our feminism is not intersectional, marginalised people are left to battle structural inequalities alone, and nobody wins. I #ChooseToChallenge exclusionary feminism and the co-opting of feminism against equality efforts around the world and right here in Scotland.

Feminism now has to be more than for just those women who are heterosexual, cis or able-bodied. So much more. Feminism is compassionate, empathic, powerful. Feminism considers the humanity of ALL women regardless of race, ethnicity, sexual orientation, trans status, disability, class, education, hormonal or chromosomal makeup, refugee status or age. My feminism considers the humanity of ALL people. My feminism does not distrust or denigrate men, the same men, who suffer under toxic masculinity, the bedrock of the patriarchy. Feminism has and will change the world for the better, but only if it is inclusive, only if it is intersectional. Feminism takes its root in the souls of those who demand equality. I #ChooseToChallenge feminists to step up for everyone in this fight.